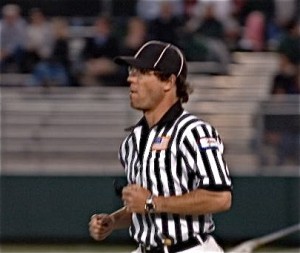 Greg Simon was posthumously inducted into the 2011 Class of the NorCal Lacrosse Hall of Fame in 2014. The following passage was written and shared at his induction by long-time friend and fellow referee, Gary Alabaster. Simo’s wife, Heidi Locke Simon, accepted his award.

Old time lacrosse enthusiasts often talk about the spirit of the game, and our life experiences tell us that lacrosse is somehow different than other sports, perhaps because it originated as a Native American sport with deep spiritual roots. No one exemplified the ideal of lacrosse being so much more than just a sport more than Greg Simon, a longtime Northern California lacrosse official who passed away after a long battle with melanoma on October 29, 2010.

Greg, who was known, literally around the world, as Simo, played lacrosse at and  graduated from the Renbrook School in West Hartford, Connecticut; Phillips Academy, Andover, Massachusetts, Class of 1983, and Stanford University, Class of 1987. Simo started officiating lacrosse on a regular basis in 1993, and quickly became one of the most accomplished officials in Northern California. He officiated California high school state championship games, California high school section championships, and numerous league playoff and championship games in the Western Collegiate Lacrosse League.

His superb work on the field also earned him multiple invitations to the championship tournaments for the US Lacrosse Men’s Division Intercollegiate Associates, which is now known as the Men’s Collegiate Lacrosse Association. Simo’s contributions to lacrosse go far beyond the on-field officiating at which he was a master. Simo was a trainer of officials in Northern California, and his training expertise was recognized by his appointment to the USL Men’s Division Official’s Training Committee. While on that committee, Simo helped write the USL Training Manual that is now used throughout the United States to train entry level and high school officials. 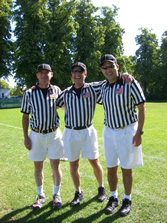 While involved in training new officials, Simo and his close friend and fellow Northern California lacrosse official and trainer, John Boone, found themselves referring trainees to officials supply stores for the required gear. Simo and Boonie decided that they could supply officials with the uniforms and other gear we need for less money than the already established suppliers, and ZebraWear was born.

Never one to accept the status quo if he thought something could be improved, Simo devised the ZebraWear 20 second/100 second digital timer that is now sold by all of the main providers of lacrosse officials’ gear, and is in widespread use by high school and college officials throughout the United States.

Simo traveled all over the world to officiate lacrosse games, including at the Berlin and Prague Cups from 2007 – 2010, the 2008 European Championships and the 2010 World Games Festival. Wherever he went, Simo was an ambassador for lacrosse and lacrosse officiating; while officiating in Berlin, Simo created and sold tee shirts for the Berlin Open and donated all of the proceeds from their sale to raise money for the Berlin lacrosse organization.

Simo was always willing to work with younger or less experienced officials to help them get better. He had a special ability to see things from a different perspective, and he used that ability to provide a helping hand to newer officials. Simo was always patient and never overbearing. He taught officials in a way that made them want to improve; and in the games that he officiated, he’d simply demonstrate how it’s done.

Simo’s calm demeanor while training or working games with new officials was also displayed while in the heat of hotly contested “big” games. No matter how excited coaches, players, or spectators became, Simo remained unflappable, always demonstrating by his conduct and demeanor that winning or losing a particular game is less significant than maintaining the proper spirit of the competition.

Simo was one of those officials who could make the right calls, and explain them so that the players, coaches and fans would understand. Consequently, the action on the field would often get better as a result of the way Simo called the game. In addition to lacrosse, Simo was passionate about caring for and preserving the environment; he was a keen proponent of electric cars and solar energy and he supported numerous solar energy and environmental causes. Simo was also a fitness buff, but as with everything he did, he did it in his own way; as a member of the San Francisco Dolphin Club, he swam year round in the frigid waters of the San Francisco Bay.

Finally, but most importantly, Simo was a loving husband to Heidi, a caring father to his daughter, Macquarie Amiela, and a great friend to lacrosse players, coaches and officials everywhere, but particularly in Northern California. To those of us who knew him well, his most obvious attribute was his huge heart. No matter the situation, Simo’s reaction would come from his heart. His generosity of spirit and the warmness of his friendship cannot be overstated. There isn’t anyone else like him.Although we will always smile when we think of Simo and the huge contributions he made, the smiles will be tinged with sadness because he will be sadly missed and no one will ever take his place. To honor the many contributions that Simo made to lacrosse in Northern California, and to help ensure that he will never be forgotten and that his attitude and approach to officiating will live on, the Northern California Lacrosse Referees Association has created The Simo “No Worries” Achievement Award for Outstanding Officiating .

In Memory of Greg “Simo” Simon, an Autumn Blaze Maple Tree was planted at the north end of the Village Green Fields in Incline Village, Nevada in July 2012. This tree overlooks the fields where Simo loved to work games during the Annual Lake Tahoe Lacrosse Tournament each July.

In 2016 Simo was awarded the Bernie Ulman Award from the National Intercollegiate Lacrosse Officials Association (NILOA). The award is given to an  “individual who has contributed to the continued success of intercollegiate lacrosse officiating and when applicable has made a meaningful contribution to the game of lacrosse.”

Obituary in the San Francisco Chronicle